An Introduction to "Off The Grid"

in My Books
Aloha. In this post, I want to tell you a bit about my book, Off The Grid, just as though we were together at a book talk at your favorite bookstore. Off the Grid, like 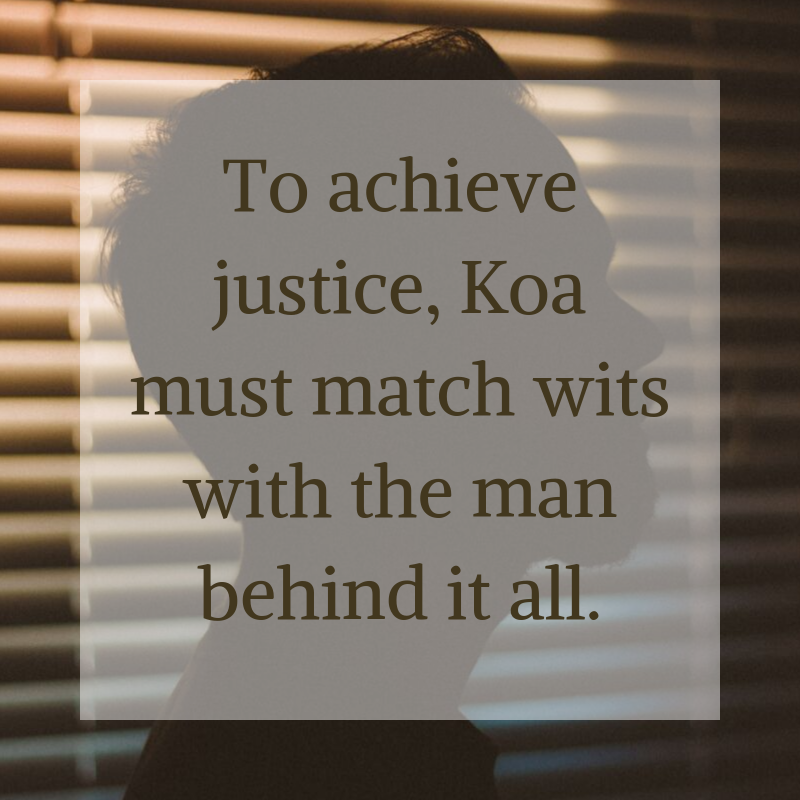 my first novel, Death of a Messenger, is set on the Big Island of Hawaiʻi . . . not the tourist Hawaiʻi . . . but the authentic down to earth reality that is Hawaiʻi.

I can say that because I lived there off and on for 20 years and was fortunate enough to have genuine friends from Hawaiʻi. They include Ellsworth, the 13th of 17 children who grew up on Kauai. And Jennifer, who grew up on Oʻahu and who respects the ʻāina, the land, more than most environmentalists. And Corky and Pono, descendants of the missionaries, who now run large Hawaiian cattle ranches.

My protagonist throughout the series is Koa Kāne, the Chief Detective of the Hilo police force, on the rainy, eastern side of the Big Island. He’s Hawaiian, uses Hawaiian phrases, and has a deep appreciation for Hawaiian culture and history. The following paragraphs from the book give a glimpse of his thinking:

Koa walked outside to the observation area overlooking the Kīlauea caldera. A cloud of whitish-gray sulfur dioxide–laced steam rose from Halemaʻumaʻu, the half-mile-wide pit crater within the larger caldera. According to Hawaiian legend, Pele made her home inside Halemaʻumaʻu, where she fought unending battles with Kamapuaʻa, a Hawaiian demigod who attacked Pele with rainwater.

During daylight, the goddess inside Kīlauea’s cauldron of fire appeared to rest, but at night the glow from the boiling lava deep within turned the steamy, sulfur-laden clouds a bright fluorescent red-orange, and Pele’s awesome voice deep within the earth rumbled like a dozen jet engines. No wonder the ancients left tributes to the goddess of volcanic fury on the edge of Halemaʻumaʻu, and more recent visitors donated bottles of gin for the fire witch.

For Koa, like most true Hawaiians, Kīlauea was magical—the place where the earth father Wākea and the earth mother Papa were still giving birth to the islands. Kīlauea, like the majesty of the star-spangled night sky, expressed the awesome mystery of nature and reminded Koa of his insignificance in the universe. As a man, he might live four score or more years, but Pele existed for millennia and created the firmament.

Koa is a true Hawaiian, but also a veteran of the US military, one who has seen combat and experienced the wider world outside Hawaiʻi which gives him some haole or western perspective on his native history and culture. He’s also a cop with a secret criminal past. His crime grows out of his reckless efforts to avenge his father’s death. I quote a passage from the book:

Koa first confronted death when his father, a simple sugar worker had fallen, or been pushed, into the giant steel rollers of a cane-crushing machine. Eighteen at the time, Koa had seen the brutality of the sugar fields suck the life out of his dad. In just a few years, the vibrant, fun-loving man of his early youth had become stooped and withered long before his time. Along with other workers, his dad had tried to unionize, only to be brutalized by the mill manager, one Anthony Hazzard, and his overseers before the giant steel rollers of the cane-crushing machine had finished the job.

Koa then learns from his father’s co-workers that the accident was no accident. He blames the mill manager and takes matters into his own hands. Again quoting:

He’d tracked the manager to his hunting cabin high in the Kohala Mountains, and hidden in the forest, biding his time. . . . He’d seized the moment and attacked, jumping Hazzard and choking him with bare hands until the man went limp. Wanting to punish, but not kill Hazzard, Koa had relaxed his grip. In an instant, Hazzard shot up and broke free. As the two men faced off and circled each other, Koa sensed he was outmatched and grabbed a fire iron. Like a wild horse, the enraged mill manager charged Koa, kicking and swinging his arms. Koa struck with the iron. Hazzard went down. Appalled at his own violence, Koa tried to revive the man, but the poker had done its deadly work.
Koa sits for hours in the remote cabin trying to come to terms with what he has done. He is overcome by remorse and guilt. He considers fleeing or even killing himself, but ultimately chooses to hide the manager’s death. Again quoting:
Desperate for a way out, he considered how he might hide his crime. He’d never shared his suspicions of Hazzard’s complicity in his father’s death, and no one knew he’d tracked Hazzard into the mountains. His family thought he was off on a fishing trip. Not the best alibi, but it might work.

He rejected the idea of planting evidence pointing to someone else. He couldn’t think of another good suspect and didn’t want an innocent to suffer. Instead, he settled upon faking a suicide. Sugar mills had been closing all across the island. Overseers and managers, as well as workers, were losing their jobs. Hazzard had come alone to the mountains and had been drinking heavily. Suicide might seem odd, but not impossible.
There’s a lot more backstory to Koa—how he decided to become a cop, how after joining the force he seeks out the old police file on the Hazzard killing, and what he learns. These experiences and the guilt he carries from having killed a man shape his attitudes as a detective. Quoting from another passage:
The Hazzard killing had given Koa insight into the criminal mind, the guilt and fear at having taken a human life, the elation of getting away with it, and the ever-present worry that the past might rear up at any moment. The police file had taught him not to get sucked into initial impressions and to look at a crime scene from every conceivable angle. He’d become paranoid that he’d get snookered, just like he’d fooled the cops who’d investigated Hazzard’s death.

To bring these instincts to bear, he needed to get inside the victims’ lives, see their homes, feel their vibrations, and meet their ghosts. All places harbored lapu—ghosts—telltales of the people who’d lived, loved, and fought there. He could sense those phantoms only if he was alone, surrounded by the victims’ possessions, walking where they’d walked, breathing the air they’d breathed.
You’ll see some of these traits with Koa at work on a barren lava field near Hawaiʻi Volcanoes National Park—where I’ve hiked many times and gotten up close to active lava. Koa’s been summoned by the park rangers. The scene takes place in Royal Gardens . . . a real community that was inundated by multiple lava flows between 2004 and 2016.
The eastern slope of the Kīlauea volcano hosted even more bizarre kīpuka areas—remnants of human civilization. Royal Gardens was one. In the speculative land boom of the 1960s, developers carved up 1,800 acres of volcanic wasteland into one-acre homesites, lacking water, electricity, telephone, and sewage, and sold them to the unsuspecting public for $1,000 per lot. Advertised as directly adjacent to the “spectacular attractions” of Hawaiʻi Volcanoes National Park . . . .

The buyers got their promised spectacular attractions, but the volcanic fireworks produced streams of molten rock pushing through the streets of Royal Gardens, consuming homes, cars, and everything else in their path. Pele, capricious as always, left remnants of scattered buildings, stop signs sticking out of solid rock, and occasional stretches of unimproved road going from nowhere to nowhere. In other places, she buried the community in over one hundred feet of new lava.
Here’s what Koa finds near Royal Gardens. I again quote a passage from the book:
Avoiding the new lava, but nevertheless feeling the heat it radiated, Koa knelt next to the plastic and removed the rocks anchoring one side. Before he could lift the sheet, a gust of wind caught the edge, whipping it away. The ugly odor of decomposing flesh assaulted him. “Jesus Christ . . .” The words were out before he could control himself.

He’d seen scorched bodies—way too many of them. Men caught by mortar fire or too close to an exploding RPG. For years after Somalia, reddened, blistered faces shorn of hair had joined Hazzard’s face in his nightmares. Now he faced another scorched corpse. For a moment, the sight triggered horrible memories, but with great effort, he forced them away. He had to concentrate, to focus on the present, on his job. Get the job done . . . for his own redemption. That’s how he’d become chief detective.

He forced himself to study the corpse, taking in every detail. He’d taught himself to go slowly, to absorb every facet of a crime scene, to look not only for what was there but also for what was missing. And false clues. His experience with Hazzard made him paranoid.
Off the Grid involves multiple mysteries. Who are the victims? Who killed them? Why were they killed? And finally how to bring the perpetrators to justice. As Koa pursues these questions, obstacles pile up. The CIA and other government entities show up. Koa gets crosswise with his own chief. The setting expands from the Big Island to encompass one of the most bizarre international events of contemporary times. To achieve justice, Koa must match wits with the man behind it all. As one review put it “The artifice that captures the mastermind behind the plot is worthy of Sherlock Holmes himself.”

I hope you enjoy reading Off The Grid as much as I enjoyed writing it.
Prev Next