An Introduction to "Retribution" 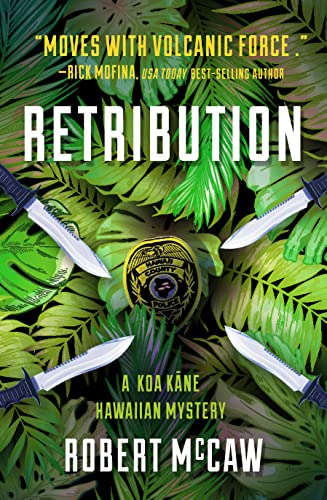 Retribution begins with an insidious attack on Chief Detective Koa Kāne’s brother. Then, it gradually escalates into an all-out attack on the Hilo law enforcement community, threatening to destroy Koa and all those close to him.

I wrote the story with two themes in mind. First, I hoped the plot would show readers Koa’s incredible persistence and resilience. He suffers blow after blow as some evil force attacks those closest to him. Yet, like an unwavering underdog, he fights back with skill and determination to save those under siege. The roots of his resolve and tenacity lie in his history. He recovered from his accidental killing of his father’s nemesis, survived the bloody battle in Mogadishu, and honored the Army buddy who died in his arms. These training grounds serve him well in Retribution’s evil onslaught.

Second, Retribution is about motive. Detectives universally look for opportunity, means, and motive, and the latter is often the key to solving a crime. As Koa begins to recognize the scope of the assault, his inability to see the motive behind the anti-police assault haunts him. Who, along with the wherewithal and the means, has the motive to launch such a blitzkrieg against law enforcement? Has one of the many criminals Koa brought to justice escaped or been released from jail eager to seek revenge? Is Hilo’s new mayor our for payback over Koa’s arrest of the mayor’s son? Have terrorists arrived on the Big Island seeking to sow widespread fear? Could someone in the ever-simmering sovereignty movement have turned to mass violence?

Or could there be another motive, one as old as time? The Greek playwright Aeschylus, often called the father of tragedy, recognized that “very few men [can] honor without envy a friend who has prospered.” Indeed, Oliver Stone warned never to “underestimate the power of . . . envy to destroy.”
Prev