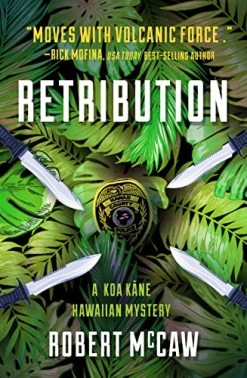 As people around him come under attack, Chief Detective Koa Kāne wonders if he might be the real target.

In the back alley of a bar on Hawaii Island, a young man is found stabbed to death. When Hilo Chief Detective Koa Kāne begins investigating the crime, the murder weapon is recovered only a few feet away from the body. Crime scene technicians find fingerprints on the knife­­­­­­­­—they are a perfect match for Koa’s younger brother, Ikaika.

As the brothers scramble to prove Ikaika’s innocence, another crime sends shockwaves through the Hilo police force. A sniper tries to take out Makanui, Koa’s closest colleague. As Koa tries to figure out whether these crimes are linked, the sinister force continues their killing spree, threatening Koa and his loved ones at every turn.

Could Koa be the real target? If so, who is behind this trail of retribution? With his own secret criminal past, Koa confronts an all-out offensive against those closest to him and his police force to which he has devoted his life. As the bodies pile up, Koa finds himself the ultimate target of a ruthless adversary and must risk it all to survive.