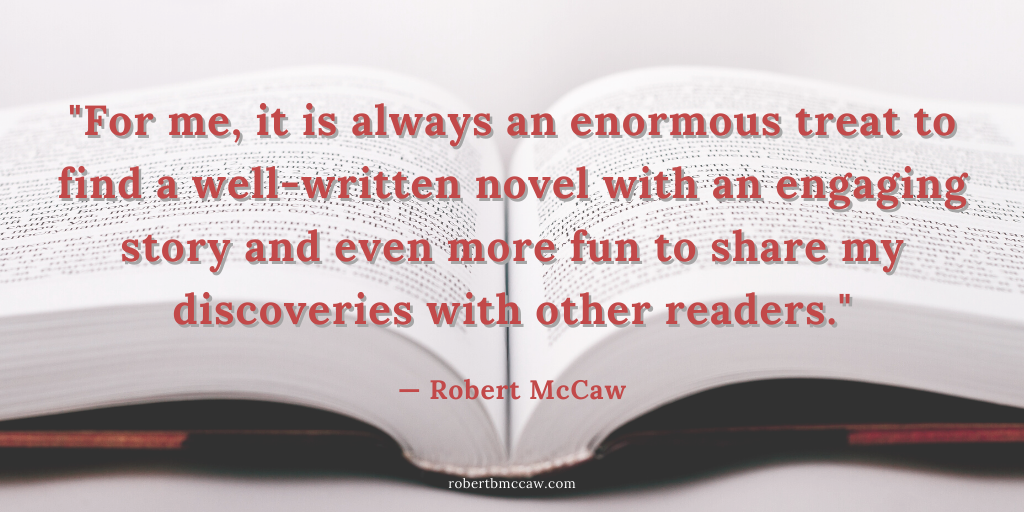 For me, it is always an enormous treat to find a well-written novel with an engaging story and even more fun to share my discoveries with other readers. Here are some of my recent finds.

Delia Owens’s Where the Crawdads Sing is a finely woven tapestry of abandonment, prejudice, survival, nature, loneliness, and love in lyrical language. Kya, the abandoned child protagonist, grows up alone in a North Carolina marsh, abandoned by her mother, her siblings, and finally her father.  Shunned by the local townsfolk, she survives and thrives through her cunning and a single friendship. Isolated and lonely, she learns more about human behavior from the creatures around her than most “civilized” people discover in a lifetime. She discovers love, and then betrayed again, she retreats into pervasive loneliness.

Some might doubt that an entire community could reject a six-year-old girl living alone in the marsh. Yet, in a world where governments imprisoning migrants and separate them from their children who are forced to live in squalid detention camps and where ordinary people walk past their homeless contemporaries living on the street without a charitable thought, it’s not such a stretch to think a community would reject a “marsh girl” as an undesirable outcast. In Where the Crawdads Sing rejection only fosters Kya’s resentment and fear, deepening her sense of loneliness and increasing her isolation. That, in turn, reinforces the community’s prejudice. Owens thus creates a pervasive climate of prejudice.

Immersed in her private world, Kya bonds with nature, absorbing a wealth of biological insight and learning many tricks of survival from the animals, plants, and insects of the marsh. It’s here that Owen’s prose, drawing upon her deep knowledge of the marsh and its inhabitants, truly blossoms. From gulls to fireflies Kya sees parallels to human behavior. Faced with isolation and hunger, Kya becomes much more than a survivor, catching fish, digging mussels, growing vegetables. Along the way, she becomes an expert researcher and recorder of the swamp environment and its inhabitants, ultimately surpassing the townsfolk with her accumulated acumen. The turnabout is both stunning and thrilling.

Owens’s deft character development is on display throughout Where the Crawdads Sing, starting with the scared portrait of an abandoned six-year-old and continuing through her development as a teenager, slowly blossoming into womanhood, while gradually growing in self-education, insight, and intuition. What Kya learns from fireflies is only one of Owens’s linguistic gems, using the tiniest detail to enhance her protagonist’s character.

Ultimately, it is with the tension between loneliness and love that Owens shines most brightly. Kya, deprived of human contact, longs for an intimate connection. She finds both genuine love and a manipulative imitation, but with no experience upon which to judge, cannot easily distinguish one from the other. And therein lies the heart of Where the Crawdads Sing and the delightful twists that Owens weaves so skillfully into this thoroughly engaging story. Bravo and five stars.

While Delia Owens obfuscates the implied violence in Where the Crawdads Sing, Barry Eisler put it upfront, raw and in your face in his Livia Lone series—Livia Lone, The Night Trade, The Killer Collective, and All the Devils. Not unlike Owens, Eisler, too, manifests masterful characterizations. Where Owens uses Kya’s interactions with the rhythms of the marsh to inform Kya’s portrayal, Eisler uses violence and undisguised evil to shape Livia’s essence and every thought.

Livia Lone, a child sold into sexual slavery by her Thai parents and trafficked along with her younger sister, Nason, is fiercely motivated first to protect and then to find her sibling. The humiliation, violence, and loss Livia suffers evolves to define her adult character as she develops the skills, intuition, and determination to become a Seattle PD sex-crimes detective and champion of abused women and children.

Eisler takes his readers inside Livia’s head revealing her thoughts in reaction to the abuse she endured as a child, giving definition to the urgency and violence with which she pursues justice for society’s most vulnerable victims. In a way, Livia seems to suffer from a kind of PTSD in which, despite her noble goals, she engages in excessive and raw acts, tainting her good intentions. When the criminal justice system of which she is a part fails to deliver, Livia metes out her own brand justice, taking rapists and child predators out of circulation.

Despite her excesses, we root for Livia because of the extraordinary evil perpetrated by the monsters—often hidden and protected by the veneer of respectability and the power of money and position—she pursues. And Livia’s pursuit is relentless, utilizing her native cunning, well-honed hand-to-hand combat skills, carefully cultivated intelligence network, like-minded compatriots, and police resources.