She Never Sleeps for Long 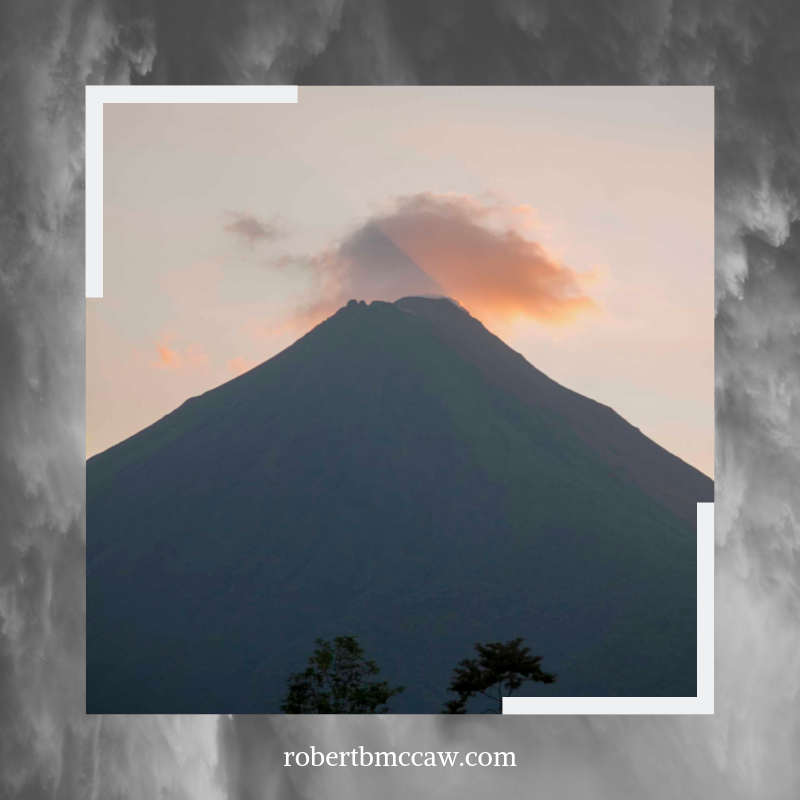 All of the Hawaiian Islands and many seamounts to the northwest emanate from a hot spot in the middle of the Pacific tectonic plate. Deep beneath the ocean, magma rises through the earth’s mantle, cutting through a weak spot in the plate, and eventually forming a mound on the seafloor. If enough magma accumulates, the top rises above the ocean’s surface to become an island. All the while, the Pacific plate moves relentlessly to the northwest, slowly carrying the new island away from the hot spot and creating space for the next one. The process has been going on for millions of years.

The westernmost islands of Kauai and Niʻihau are about 5.1 million years old, Oʻahu is about 2 to 3.5 million years old, Maui, Molokaʻi, Lānaʻi, and Kahoʻolave are younger, and the Big Island of Hawaiʻi is still being born. The hot spot from which the Hawaiian islands emerged is now off the southeastern coast of the Big Island, where it continues to feed the Big Island, as well as a new seamount called Lōʻihi that may one day become another Hawaiian island. Don’t hurry to call your real estate broker. Lōʻihi won’t become an island for another 50,000 years, and, in any event, new volcanic lands in the archipelago belong to the state.

Anyone who visits Hawaiʻi Volcanoes National Park on the Big Island can glimpse the awesome geological forces that created the islands. To the ancients, who did not understand geology, volcanism was mysterious and magical . . . the stuff of legends and gods. And so they created Pele, the goddess of volcanic fury, to explain the terrifyingly unpredictable geological violence they witnessed.

Pele put on quite a spectacular show starting in 2018 when lava exploded from Kīlauea’s east rift zone in the Puna subdivision of Lelani Gardens, sending fountains of molten rock 300 feet high and blasting ash from the volcano's caldera 12,000 feet into the atmosphere. Pele triggered 60,000 earthquakes and vomited up a billion cubic yards of magma, draining lava from Halemaʻumaʻu, the pit crater in the volcano’s caldera. The eruption destroyed more than 700 homes and created 875 acres of new land. There are places where new lava is over 100 feet thick and still hot enough more than a year later to boil water.

Following this four-month-long spectacle, Pele fell silent in late 2018. According to legend, Pele regularly fights with the Hawaiian demigod of water, and sure enough, with Halemaʻumaʻu empty of lava, the pit crater began to fill with water. It gets deeper by the day and may grow to be a couple of hundred feet in depth. Volcanologists speculate that the presence of such a lake, especially a deep one, inside Kīlauea may someday lead to an explosive eruption. That sequence probably happened in the distant past before recorded history.

Remember though that Pele is nothing if not unpredictable, and Halemaʻumaʻu is not the only or even the most dangerous place where Pele might stir. There is evidence that lava is again accumulating deep beneath the Puna area that erupted in May 2018, and history tells us that eruptions there can occur in relatively quick sequence as in 1955 and 1960. Indeed, the lower east rift zone in Puna is littered with the vents of past eruptions. Pele could thus return to this same eruption area at almost any time.

Alternatively, there is Mauna Loa, another of the Big Island’s five volcanos, with even more potential for destruction. Over 13,000 feet tall and topped by Mokuʻāweoweo crater, Mauna Loa is the world’s largest active volcano. From its base on the seafloor to its summit, it’s taller than Mount Everest. With a volume of roughly 18,000 cubic miles, Mauna Loa is so massive that it has created a depression five miles deep into the earth’s crust.

From its position close to the center of the Big Island, Mauna Loa has been erupting for over 700,000 years, including 32 eruptions since 1843, the first year in which an eruption was observed and recorded. An eruption in 1926 destroyed a village and one in 1984 reached the outskirts of Hilo, the Big Island’s largest town. Parts of Hilo are in fact built on prehistoric flows from Mauna Loa. Mauna Loa has also produced massive streams of lava that reached the west coast of Hawaiʻi, including areas now occupied by major resorts.

The US Air Force has twice bombed Mauna Loa in attempts to prevent damage from lava flows. In 1935, when lava flows threatened Hilo, then Lieutenant Colonel George S. Patton oversaw bombing runs to halt its flows. The lava stopped, but geologists doubt that the bombing brought about the reprieve. During WWII when the island was blacked out to prevent a Japanese attack, Mauna Loa erupted. Fearing that the red glow from the volcano would attract the enemy, the Air Force again bombed the mountain, again with little effect.

In short, Mauna Loa is capable of destructive lava flows going either east or west that could reach almost any of the more southern parts of the Big Island, and the notion of an imminent threat is more than theoretical. Using global positioning devices, the USGS measures both the horizontal and vertical changes at Mauna Loa’s summit. Over both the past one year and the past five years, both the distance across the caldera and the height of the summit have grown steadily.

As the mountain has continued to inflate, it has also experienced an uptick in small earthquakes. These signs suggest that magma is rising into the shallow chamber beneath the caldera. While not necessarily a precursor to an eruption, inflation certainly increases the risk. Mauna Loa has erupted 32 times in the past 176 years—an average of once every 5.5 years—but has been dormant the past 35 years since 1984. Although Mauna Loa and Kīlauea have separate magma chambers, it may not be a coincidence that Mauna Loa’s long-dormant period roughly coincides with the 35 year period preceding the May 2018 eruption, a period during which Kīlauea erupted continuously from Puʻu ʻŌʻō, a volcanic vent just outside the national park. In sum, it would not be unreasonable to expect a Mauna Loa eruption in the not too distant future.

All of these places--Halemaʻumaʻu, the east rift zone, and Mauna Loa--are all likely spots for the next Big Island eruption, but Pele is capricious. She might fool us and reappear elsewhere. Whenever and wherever she reawakens, she will vent her wrath. Pele is not to be denied.